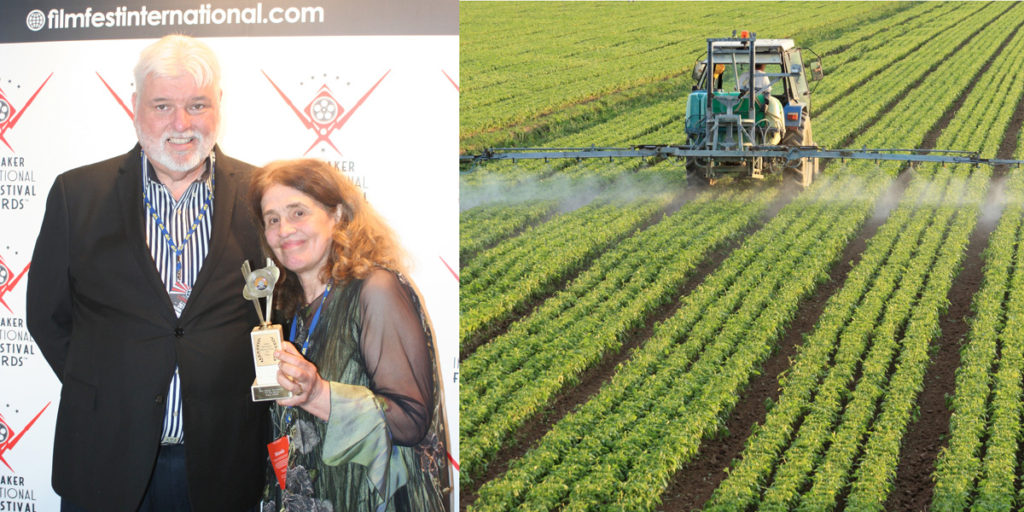 A film highlighting the dangers of GM crops and their associated pesticides has won prestigious awards at two international film festivals.

The Big Secret: A Survival Guide for the New Millennium is a new work by five-time Emmy Award-winning producer and director Alex Voss and the multi-award-winning film maker, psychiatrist, integrative physician, and radio talk show host, Susan Downs, MD, whom we interview below. 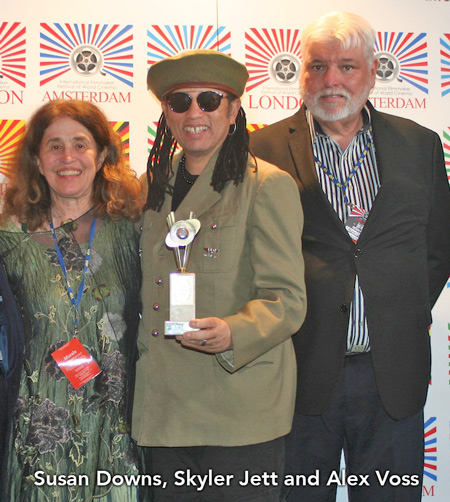 The film won Best Feature Documentary at the International Filmmaker Festival of World Cinema in London on 16 February. Last year it won the same award at the same body’s film festival in Nice, France. The image above shows Alex (left) and Susan (right). The image to the right shows Susan and Alex with the GRAMMY-award winning singer-songwriter Skyler Jett (centre), who wrote the music for the film, holding the award.

The film’s primary focus is the pharmaceutical industry, which stands accused of prioritizing corporate profits over curative or preventative treatments. It also sheds light on modern farming techniques that deplete the food we eat of its nutritional content. The film emphasizes that the United States is the wealthiest country in the world and spends more on healthcare than any other country, yet millions of unsuspecting people are dying of preventable diseases each year.

The Big Secret presents expert testimonials from traditional and integrative health professionals on subjects that will be of interest to anyone seeking to understand and take control of their health. According to publicity information for the film, Susan and Alex aim “to start a conversation that will ultimately lead to life-saving changes to our personal health, and reform in our healthcare system”.

The film discusses the risks to farming, the food supply and public health posed by GM crops and their associated pesticides. Among the interviewees featured in the film are the London-based molecular geneticist Dr Michael Antoniou, who states that the agrobiotech industry is “turning our food into a slow poison”; Steven Druker, public interest attorney and author of the book Altered Genes, Twisted Truth, which highlights the corruption of the US regulatory policy on GMOs; and GMWatch’s Claire Robinson, who discusses the industry-orchestrated persecution of scientists whose work uncovers risks from these products.

As well as being a clinician, Susan Downs is the host of the radio programme Occupy Health on www.VoiceAmerica.com. She says, “Most of the shows in March will deal with toxins, GMOs, and how the US Congress is being paid to harm our health by pushing these toxins on us.”

GMWatch interviewed Susan about her work on The Big Secret.

GMW: The main focus of the film is the abuses committed by the pharmaceutical industry. How did you get from that topic to GM crops and their associated pesticides?

SD: There are a lot of abuses whereby the US Congress is paid to hurt our citizens. I was not sure of this until the Congress voted against labelling GMO foods, when the corruption could not be more obvious.

I believe that the American public has not focused enough on the important issue of legislators being paid to support GMO and other corporate interests. Instead, during the last presidential election campaign, the public were busy with protests supporting the unsuccessful candidate, Hillary Clinton – who, however, has links to Monsanto and other corporations. If elected, Clinton would certainly have continued this injustice against the American population.

Trump promised to “drain” the legislative “swamp” – but instead has weakened the agencies that should protect the American public.

People are not focusing on the real issue: that Congress is allowing all this.

Something is very wrong in the US because the majority of the population does not seem to care that they are being poisoned.

There are other similar cases everywhere we look. Some studies show that aspartame causes cancer, yet corporate money managed to get it into the common food supply. In the hospital where I work, they sell the patients and staff sodas laden with aspartame. In another case, the sugar industry influenced Harvard studies. Yet few people seem to care.

It’s a similar situation with GMOs and their associated pesticides. Industry and industry-friendly scientists conduct studies that say GM foods are safe. Yet some independent researchers have found opposite results. These independent researchers are attacked, fired, and even physically assaulted if they don’t acquiesce. The Monsanto Papers appear to show that the company hired people to go after researchers.

People might be forgiven for concluding from these examples that the US Congress wants to make people ill so that they need more pills.

The US is also aggressively promulgating GMOs overseas.

GMW: What surprised you most during your research on GM?

SD: I was surprised to see how far Monsanto will go to destroy the opposition. You imagine it, they’ve done it.

GMW: What are your recommendations to improve the situation that this industry has created?

SD: Solutions might include:
• Voting out legislators who are paid by industries to hurt us.
• In the US, stopping the mechanisms that allow this. We must prevent lobbyists and corporations from buying our legislators. A vote should include only one issue, without the many additional ones that are slipped into bills, confusing some legislators and the public.
• On the individual level, detoxing to remove the many toxins that Westerners love to eat, put on their bodies and have in their homes and offices.
• Repairing the gut is essential. It is where inflammation, oxidative stress, and immune dysfunction can begin, contributing to the array of chronic diseases plaguing the world’s population. Also people should get checked for food allergies.
• Stopping the continued exposure to more toxins as these toxins interact synergistically. We’re often told that a little bit of a particular toxin won’t hurt you. This may be true if there are no other toxins involved. But toxins can interact synergistically by different mechanisms and the total damage they cause is more than the sum of the parts. Pesticides in foods, fragrances, chemicals that people put on their body, cleaning materials, detergents, and eating from, and microwaving in, plastics, may all contribute to the chronic disease process.
• Eating organic plant foods, grass-fed animals and wild fish. Don’t eat processed foods or GMOs, and minimize sugar.

GMW: In many ways The Big Secret comes across as a low-budget, grassroots type of film, featuring a number of experts just talking to camera. It doesn’t have fancy settings or special effects and is decidedly un-showy. Why do you think it made such an impression on the panel members who voted to give it Best Feature Documentary awards at two film festivals?

SD: The Big Secret is a low-budget film because Alex and I paid for it. The film typically provokes one of two responses. Most festivals shy away from it as they are looking for other things. But some festivals understand the importance of the message. It’s like the American public. The majority are not aware, but those who get it – currently a minority – resonate with the film. I think people need to wake up, and I hope our film will contribute to that.